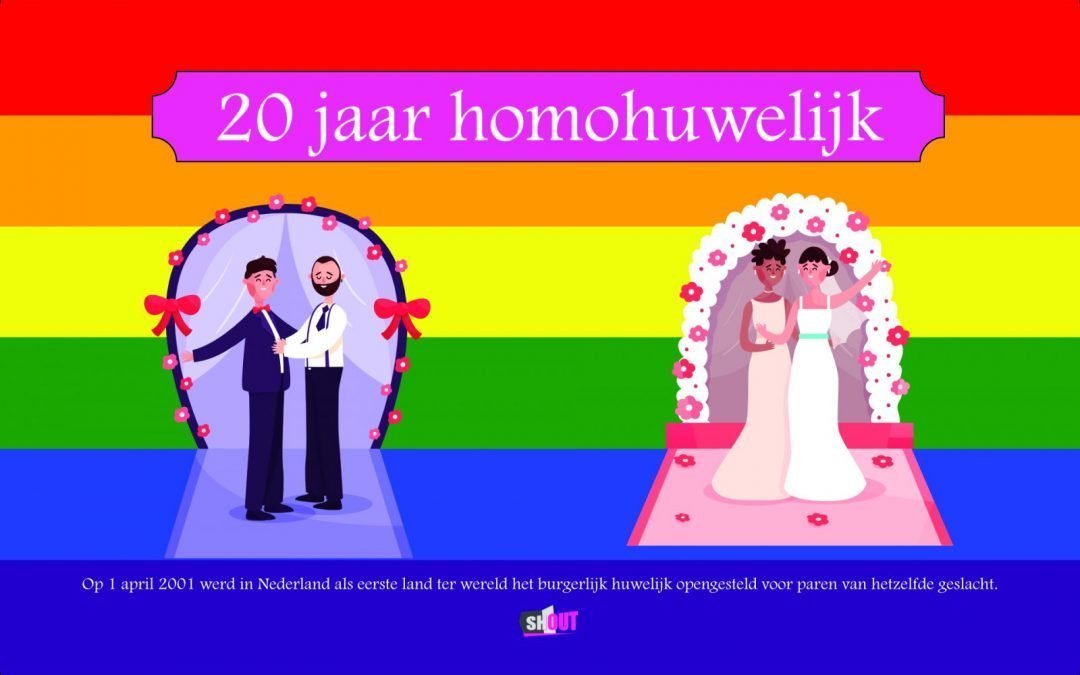 Amsterdam was 20 years ago at this moment the centre of the world. It sounds like the beginning of a nice joke, but it’s not the case. On April 1st, 2001 press from around the world, from the USA till Japan, witnessed the first official same-sex marriage in the world. Just after midnight four gay couples married in Amsterdam. The Netherlands was the first country which made this possible.

In 1988 the long battle for marriage equality began. Lawyer Jan Wolter Wabeke and editor of the Gay Krant (gay newspaper) Henk Krol started with a long campaign for same-sex marriages. Krol arranged a marriage application for a gay couple, the application was as expected rejected by the municipality. Wabeke and Krol took this case to court. Wabeke studied the Dutch law extensively and saw that the law did not forbid a gay marriage in principle, the two had a chance for success. The trial started and the judgement stated that nowhere in the law was explicitly mentioned that a marriage was only for man and women. However, the court also mentioned that the legislator intended a marriage only for hetero couples. Despite this, a small victory was made because the judge ruled that something must be arranged for same-sex couples.

There was however verry little support for a gay marriage in the major political powers at that time. Even LGBT+-organisation COC was against it: marriage was a hetero-normative institute that had to be abolished. The COC send this in a letter to member of parliament Boris Dittrich, who in 1994 addressed the topic of marriage equality. From then small progress was made, in 1996 a special committee of the Tweede Kamer (Dutch house of representatives) advised the cabinet to open marriages for same-sex couples. In 1998 registered partnership was introduced. Secretary of State Job Cohen ultimately propose the bill for marriage equality in the House, and it was adopted with 109 against 33. The law did not mention anything about a special gay marriage, but the marriage is opened up for same-sex couples.

Late in the evening of March the 31st the real party started. In the Stopera four couples, 3 male-male and 1 female-female, were received with great interest of the world press. Former Secretary of State Job Cohen was mayor of Amsterdam at that moment and had the great task of marry these couples. He started his speech 10 minutes before it became finally April the 1st. In all his honesty Cohen mentioned that ten years ago he didn’t quite understand why lesbian and gay couples really wanted to marry, but after many conversations he saw that it wasn’t really about the marriage itself but the equality and acknowledgement what came with it. Cohen was a bit too enthusiastic though at the day itself: he was already done with the whole ceremony before it was twelve o’clock, so everyone had to wait for a few minutes before the marriage finally could be made official. Cohen officially married the four couples with a tap with a hammer just after midnight. Applause and cheering followed, and the wedding cakes were cut.

Currently about 20000 same-sex couples are preformed in the Netherlands and many countries followed with marriage-equality. Belgium was the second country that opened marriages and same-sex marriages were legal in 2003. Now, there are 29 country where same-sex marriages are performed.  In some other country’s marriage-equality is already present at a local scale. In Japan a court ruled that the ban on same-sex marriages is unconstitutional. In Switzerland, Czech Republic and Chili laws are made but it must be adopted by referendum or parliament. Slowly the list of countries where people who love each other could marry becomes longer, and love is the most important thing for a marriage of course.